Dad’s Camera is a picture book about love, loss and legacy – with a heart-warming ending. Told from the perspective of a boy whose father is suddenly acting strangely, the story explores the impact early onset Alzheimer’s can have on family, as well as creating a legacy through photography.

“As readers experience uncertainty, Watkins opens the door to discussion, making this an opportunity for dialogue about an illness that touches the lives of so many today.” Kirkus Reviews

Why did I choose to write this story?

Dad’s Camera is dedicated to Royston Smith, my father-in-law, who I witnessed suffering from Alzheimer’s until his death during my teenage years. Sadly, very few photographs of him or the things he owned – those trinkets of his life – remain. The growing prevalence of dementia and Alzheimer’s means that an increasing number of children are bearing witness to this disease, not only in their grandparents but also parents. I wrote Dad’s Camera to create a way for children and adults to talk about the confusion often surrounding Alzheimer’s, but also to celebrate the tenderness and small surprises of such difficult times.

Do you think this story is for all children, or just for children who have family member suffering from Alzheimer’s?

When I wrote Dad’s Camera I was not thinking about a specific readership – I was just telling a story I believed needed to be told, and which I felt I was able to tell, in my own way. Since the book’s publication, I have come to understand the very real impact this story can have on its readers. I must say that I’ve spoken to more adults about the book than children, and those people have thanked me for the book because it has allowed them to discuss this difficult topic with their family, especially their children. The growing prevalence of dementia and Alzheimer’s means that an increasing number of children are bearing witness to this disease, not only in their grandparents but also parents. But I also believe that the book can be meaningful for children who have not witnessed the effects of dementia. Because the disease is never named, the story remains somewhat open to interpretation. I also believe that the idea of photography, personal objects and their tie to memory, identity and notions of family are ideas we can all engage with.

What kind of person was Dad, and why did he choose to be remembered this way?

In my mind the father was somewhat conservative and predictable, someone who liked order in his life. The kind of father who doesn’t do anything especially creative. And this is why it’s odd that he brings the camera home and starts photographing objects around the house (and not his family). Why does he choose this way to be remembered? I like to think that, like me, he appreciated the idea that our possessions say a lot about us, and that this is especially valued when those objects are all that is left upon death, and family members must sort through these objects to decide what will be kept and what will be discarded. His choice to photograph these objects is his way of ensuring that his family will remember precisely who he was via his context.

“The research drawings for this book were largely made in my own family home. Shortly afterwards my mother died unexpectedly and our house was sold. This book gave me an opportunity to draw the things that meant much to me and those drawings I will keep forever. We all one day will lose someone we love. My hope is that this book provides some comfort, especially where Alzheimer’s has changed that person so sadly before they departed.”

Did you collaborate much with Liz Anelli, the book’s illustrator?

Believe it or not, no. We only spoke via teleconference call twice during the publication process, and only emailed a couple of times as well. While sometimes this might end in disaster, fortunately our editors were the best in the business and understood my visions for the book, and also understood how to get the best from both Liz and I. Liz came into the project quite late and she brought a richness and depth to my words I could have only hoped for. The first time Liz and I met in person was at the Australian book launch in Newcastle. Liz Anelli’s website and Facebook.

Published in Australia and China as One Photo. 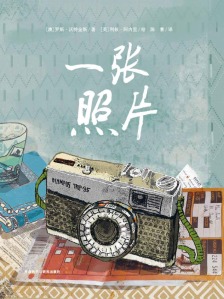